Superintendent Kathy Hoffman on KSAZ: “Trump’s push to reopen schools is completely out of touch with reality here on the ground in Arizona.” 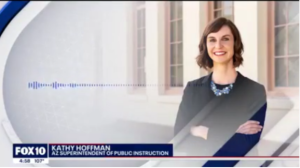 FL Dems: “‘Trump’s push to reopen schools with a one size fits all approach is proof that he has a complete lack of understanding of the dire situation here in Florida, and a lack of empathy for the teachers and families who will bear the brunt of his reckless decisions,’ said Florida Democratic Party Spokesperson Frances Swanson. ‘Floridians deserve a president who will put public health and safety over politics. Floridians deserve Joe Biden.’”

WLNS: State Democrats to slam school re-opening plan by Betsy Devos. “The Michigan Democratic Party is holding a virtual press conference today to discuss how to safely re-open schools in Michigan and their total disagreement with the plan set forth by the Education Secretary, Betsy Devos.”

WSYX: DeVos Threatens District Money. “Ohio educators are calling the head of the U.S. Department of Education reckless as she pushes for all schools to open within these next few weeks. […] ‘I find it shameful that Betsy DeVos is going to be doing a virtual event in Ohio tomorrow, talking to the Federalist [Society], but she’s not reaching out to any educators.’” 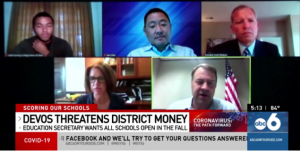 Wisconsin Teacher On WFRV: “They don’t care that children, parents, and teachers will inevitably get sick, may carry lifelong ailments from exposure to the illness, and that some will most certainly die.” 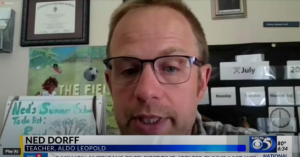 Tucson Weekly: As AZ Emerges as a Swing State in 2020 Presidential Contest, DNC Launches New Ad Targeting Trump on Tucson Airwaves. “‘America’s seniors raised us,’ DNC Chair Tom Perez said in a prepared statement. ‘They fought for our country, and they worked to build us a better future. But when experts warned that coronavirus would hit older Arizonans hard, Trump refused to listen. He didn’t care — in fact, he pushed to open our country without the necessary safety measures, jeopardizing their health, because he thought it would help his reelection.’”

Sun Sentinel: Democrats’ South Florida ad tells seniors Trump threw them to the COVID-19 wolves. “A Democratic Party ad that starts running in South Florida on Friday attempts to undermine President Donald Trump with seniors by highlighting what it deems his mismanagement of the coronavirus pandemic — and the outsize impact on older people.”

PennLive: “A new ad from the Democratic National Committee, set to start airing in the Wilkes-Barre/Scranton market this morning, takes the Trump administration to task over its management of the COVID-19 pandemic. The new spot, ‘Wolves,’ accuses the White House of throwing the nation to … the wolves.”

El Paso Matters: In rare move, DNC targets presidential ad at El Paso voters. “The Democratic National Committee on Friday began running an ad called ‘Wolves,’ aimed at senior citizens in El Paso and other communities viewed by the DNC as potential battlegrounds. The ad criticizes President Trump for mismanaging the COVID-19 response and jeopardizing the lives of older Americans.”

HOLDING TRUMP ACCOUNTABLE. Wherever Trump and his cronies go, Democrats will be there to call out his failed record. See for yourself:

LA Dems: “In January, Donald Trump told us the pandemic was ‘totally under control’ and promised that it would be ‘just fine.’ […] Now, nearly six months later, more than 135,000 Americans have lost their lives, and millions more have lost their jobs. Mike Pence can’t spin that devastating reality.”

Philadelphia Inquirer: “The Pennsylvania Democratic Party on Thursday called the event ‘a cheap political rally designed to appease Trump’s far-right donors.’ ‘Instead of working to address the ongoing COVID-19 crisis, which has claimed the lives of nearly 7,000 Pennsylvanians, Donald Trump is sending one of his lackeys to double down on their anti-LGBTQ+, antichoice agenda.’”

Amarillo Pioneer: “Prior to Monday night’s town hall, the Texas Democratic Party issued a statement blasting Trump for taking part in the call. ‘Today’s political stunt can’t spin the devastating toll that Trump’s failed coronavirus response has taken on essential workers across the panhandle, who are facing spiking COVID-19 cases and unemployment. Texans see right through this cheap ploy.’”

REPUBLICANS HIT THE PANIC BUTTON. While Trump keeps funneling disinformation to his own supporters, Democrats are flocking to vote-by-mail ahead of the general election. Republican operatives are… concerned.

WSJ: Democrats—and Some Republicans—See Signs of Political Realignment in the South. “Political observers say Virginia—where Democrats have consistently won over newcomers in the Washington, D.C., suburbs and exurbs—paints a cautionary tale for the GOP’s grip on power in the South.”