Happy (almost) holidays! This is the DNC’s Battleground Brief — a weekly wrap-up of Trump’s broken promises and everything you need to know across the path to 270. After this edition, we’ll return in 2020.

COURT RULING CONFIRMS HEALTH CARE WILL BE DEFINING ISSUE OF  2020. Here’s what this week’s ACA court ruling means for the presidential race: Trump’s health care agenda that jeopardizes coverage protections for those with preexisting conditions and spikes costs will continue to be a defining issue of the 2020 campaign — and Democrats across the country are speaking out:

From Chair Perez: “Donald Trump and Republicans went to court to destroy Americans’ health care, and now they’re closer than ever before…Make no mistake: health care is on the ballot in 2020. And the American people are ready to elect a president they can trust to protect it.”

From Wisconsin Democrats:  “We are going to make sure every voter in this state is aware of the President’s broken promises and the steps he has taken to try to take away their health care.”

From Pennsylvania Democrats: “Trump and Republicans are now one step closer to destroying our health care system. […] Health care is on the ballot in 2020 and Pennsylvanians will not be fooled by Trump’s broken promises.”

From Ohio Democrats: “Trump and the GOP have never had a plan for health care — this lawsuit that he’s cheerleading is the Republican plan. It will rip coverage away from more than half a million Ohioans who are covered under the Medicaid expansion, take protections away from nearly five million Ohioans with pre-existing conditions and put as many as one-fourth of Ohio’s hospitals at risk for closure.”

Lots more from state parties across the battlegrounds here.

GREETING TRUMP WHEN HE LANDED IN MICHIGAN, FROM BRIDGE: WELCOME TO MICHIGAN PRESIDENT TRUMP. ABOUT THAT ECONOMY YOU PROMISED…The Bridge news-service greeted Trump’s visit to Michigan this week with a rundown of the reality of his economic record, some highlights:

THIS WEEKEND MARKS TWO YEARS SINCE TRUMP SIGNED HIS TAX SCAM INTO LAW — DEMOCRATS ARE POUNCING. 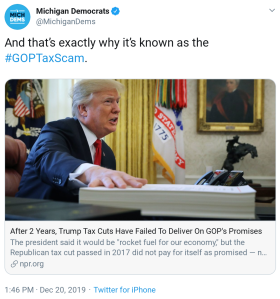 FLORIDA LAYING THE GROUNDWORK TO WIN —  “EXECUTIVE DIRECTOR OF FLORIDA DEMOCRATIC PARTY SAYS HIS PARTY IS ‘ INVESTING EARLY’ FOR 2020 ELECTIONS.” Read more from the News Service of Florida here.

AND GROWING THE TEAM — “FRANCES SWANSON NAMED FLORIDA DEMOCRATIC PARTY’S RAPID RESPONSE DIRECTOR.”  From FDP Chair Terrie Rizzo: “The road to the White House runs right through Florida and it is crucial we have someone dedicated to exposing Trump for who he really is — a corrupt and ineffective President who consistently breaks his promises to Floridians.” Read more from Florida Politics here.

“If Trump is having a bad day in Washington, he’s having a disastrous week in the battlegrounds. Less than one year out from Election Day, his New Hampshire campaign is in shambles. While his team points fingers and throws staff under the bus, New Hampshire Democrats are busy organizing, building general election infrastructure, and talking to voters about Trump’s broken promises to Granite Staters.”

CHAIR PEREZ HIGHLIGHTS HEALTH CARE AT LATINO ROUNDTABLE IN LA. Ahead of Thursday’s debate in Los Angeles, DNC Chair Tom Perez, LA Mayor Eric Garcetti, and health care leaders from across the state met to discuss the importance of health care options for Latinos. Perez: “The absence of sufficient health care professions with workforce diversity was one of the primary causes of racial and ethnic disparity in health care.” More here.

WHEREVER TRUMP OR HIS CRONIES GO, DEMOCRATS ARE HOLDING ARE THEM ACCOUNTABLE FOR HIS BROKEN PROMISES.

Tallahassee Democrat: “Democrats panned the announcement as ‘a smoke and mirrors attempt to cover up Trump’s endless broken promises on health care.’ ‘Today, the Trump Administration is putting on a show to hawk another empty promise to Floridians, but all shows must come to an end,’ said Florida Democratic Party Chair Terrie Rizzo. ‘Floridians will remember Trump’s attacks on their health care at the ballot box this November.’”

IOWANS CAN NOW CAUCUS FROM MADRID, IOWA TO PARIS, FRANCE.

The Iowa Democratic Party released a list of 99 approved satellite caucus sites Wednesday afternoon. The list includes sites in 13 other states and D.C., as well as three in foreign countries: France, Scotland and the Republic of Georgia. Read more here.

FROM THE NEVADA CURRENT: TAGALOG TRAININGS POP UP AHEAD OF NEVADA’S CAUCUS.  “Nevada has one of the nation’s fastest growing AAPI populations, which has increased 167 percent since 2000 according to the policy research group AAPI Data. An estimated 335,000 AAPI Nevadans account for roughly 10 percent of the state’s population. About half of them, roughly 162,000 are Filipino.”

WISCONSIN DEMS WILL PROTECT EVERY PERSON’S RIGHT TO VOTE.

This week, Wisconsin Republicans announced they would be purging more than 200,000 voters from the rolls before 2020 — and the Wisconsin Democrats are fighting back. From Chair Ben Wikler: “This is an organizing challenge,” […]  “It’s a reason to work, not to freak out.” Read more from PBS: Wisconsin Democrats vow to register voters who may be purged.

“IT’S KILLING US” — TRUMP GOT ROLLED BY CHINA AND THE GUARDIAN EXPOSES THE IMPACT OF TRADE POLICIES IN THE MIDWEST.  A devastating report from The Guardian detailed the terrible impacts of Trump’s erratic trade policies for working families across many battleground states. From the report:

NYT: There Are Economic Warning Signs for Trump in the Midwest

NBC: Trump’s campaigning on the roaring economy. Here’s how Democrats plan to stop him.

The Hill: Democrats say Trump economy is not working for most Americans